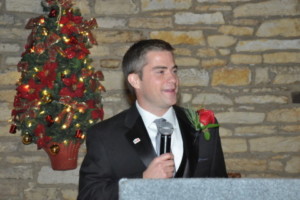 was recently inaugurated as president of the SouthWest Suburban Home Builders Association (SSHBA) at a ceremony held at the Public Landing in Lockport. Being elected to this position is a tremendous honor for both Matt and Beechen & Dill Homes.

The SSHBA is More Than a Trade Organization

The SSHBA is an industry organization which represents the interests of area home builders, but it is really more than just a trade organization. Its membership includes over 200 home builders from South and Southwest Chicago that have come together to improve what they do. Through meetings, speakers, educational initiatives, and events, the group finds ways to build superior homes for less. Ultimately, the goal of the group is to make it easier to turn a dream home into a reality.

Matt Dill was chosen by SSHBA members and the Board of Directors at a special ceremony held at Public Landing in Lockport, Illinois. As president, Matt Dill will be tasked with leading the group’s efforts, serving as a public spokesman, and ensuring that every initiative serves the greater good. Matt Dill was sworn in by his father, also a home builder who served as the SSHBA president over 20 years ago. Having the title passed to a second generation member illustrates Beechen & Dill Home’s unwavering commitment to quality, innovation, and customer satisfaction.

Leading the SSHBA Into the Future

On his future as president, Matt Dill said, “I look forward to bringing the same passion I have for my business to the organization in hopes of building on past success to push the organization ahead in 2015.”

The organization has a long track record of success, service, and advocacy, and 2015 promises to be its best year yet. The event calendar is quickly filling up with speakers, networking opportunities, and lots more all meant to improve the way that Chicago-area homes get built. With Matt at the helm, the group plans to launch exciting and ambitious new initiatives while sticking to its core values.